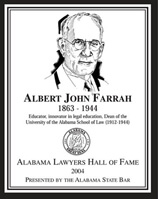 Dean Albert John Farrah was a native of the state of Michigan. He was born in Michigan, attended the University of Michigan and graduated from the University of Michigan Law School. Prior to becoming a lawyer, Dean Farrah had been in education–a school superintendent. After practicing law for two years in Battle Creek, he was invited to return to his alma mater as a law professor. He taught there for three years. Farrah had found his true calling in the area of legal education.

Perhaps the bitter winters in the Midwest made the South look quite attractive to Farrah. He became dean of three southern schools– first Stetson, from 1900 to 1909; then Florida, from 1909 to 1912; and finally the University of Alabama, from 1912 until his death in 1944. He was the longest-serving dean in that school’s history.

When Farrah came to Alabama, the law library had only a few hundred books. Classes were held in Morgan Hail, a general classroom building where it was always hot in the summer and cold in the winter. Dean Farrah got to work. The library increased to over 20,000 volumes. The law school became accredited by the American Bar Association and the Association of American Law Schools. And, he oversaw the construction of a new law building, where two generations of lawyers attended law classes. It became known as Farrah Hall.

Dean Farrah raised the level of legal education in the state of Alabama. His belief was that Alabama’s state law school should be a special place and that no son or daughter of Alabama should ever have to leave the state to obtain a great legal education. Succeeding generations of deans, professors, law students and alumni have built on Farrah’s firm foundation that he established at the University of Alabama School of Law. 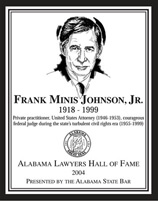 Frank M. Johnson, Jr. was born and educated in Alabama and graduated from the University of Alabama School of Law. He served as a combat infantryman in World War II, was twice wounded and ended his military career as a legal officer in Germany.

Judge Johnson had a very short period of “calm” before the “Civil Rights Storm” that came to Montgomery and the United States. In a 1980 television interview, Bill Moyers noted that “fate placed Frank M. Johnson, Jr. in the nerve center of confrontation and change” One of his earliest decisions declared that segregated public transportation– the bus system of Montgomery–was unconstitutional.

Other landmark cases and decisions came rapidly in his judicial career. He ordered that blacks be registered to vote. His opinion in United States v. Alabama (1961) created a standard that was written into the 1965 Voting Rights Act. He was the first judge to apply the one-man, one-vote principle to state legislative apportionment. He ordered the first comprehensive statewide school desegregation. He was the first judge to apply the equal protection clause of the Constitution to state laws discriminating against women. He established the precedent that people in mental institutions have a constitutional right to –treatment. He ordered the end of the jungle-like conditions in Alabama prisons. And, he stated that the law was clear that citizens have the right to petition their government to address grievances and that those rights be exercised by marching along a public highway from Selma to Montgomery.

Judge Johnson was one of the most honored judges of the 20th Century. He received honorary doctorates from colleges all over the country, including Notre Dame, Princeton, St. Michael’s College, the University of Alabama, Boston University, Yale, Tuskegee Institute, and Mercer. At least four biographies have been written about him. Frank Johnson was a great lawyer and earned a national reputation as a great judge. 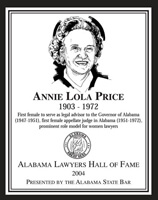 Judge Price was born in Cullman and attended Athens College. She worked in a law office in Cullman as a secretary and after “reading the law:’ she passed the Alabama Bar Exam in 1928, becoming one of the state’s first women lawyers.

Governor “Big Jim” Folsom appointed Annie Lola Price to serve as his legal advisor in 1950. She was the first female legal advisor to serve a governor in Alabama. In 1951, Governor Folsom appointed his legal advisor to the court of appeals. The appointment was controversial at the time, and she declined to have a public investiture ceremony. Instead, she had a private ceremony where she was sworn in by her friend, Secretary of State Mable Amos, in her office. However, the voters of Alabama recognized the ability of Annie Lola Price and elected her to judicial office in 1952, 1958, 1964 and 1970.

The interesting anomaly about Judge Price was that at one time she was the highest ranking female appellate court judge–a presiding appellate court judge–in this country. However, her service predated the period of time when women were allowed to sit on juries in Alabama. For the first 15 years of her service, she reviewed lower court decisions but was not eligible to serve on the juries making those decisions.

Annie Lola Price served with great distinction as an appellate judge for 21 years until her death in 1972. At her memorial service, Nina Miglionico stated, “Women will remember most her quietness, her dignity; I never once heard her say an unkind thing.” Judge Price was a pioneer and a role model for women lawyers in Alabama and she expanded options for women in the legal profession. She has also been inducted into the Alabama Women’s Hall of Fame. 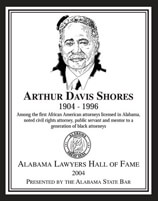 Arthur Shores can be described in many ways. He was a courageous battler for civil rights. He was considered Alabama’s “drum major for justice.” However, the most affectionate title which I heard referring to him was “Daddy Shores” This title was not limited to his own children–Helen and Barbara–but to generations of young lawyers who sought his advice and received his mentorship.

Arthur was initially an educator serving as a teacher and high school principal He had graduated from Talladega College but only completed one year of law school at the University of Kansas. He continued his legal studies through correspondence courses and then sat for and passed the Alabama Bar Exam in 1937. He was one of only a handful of black attorneys in the state, but his impact began immediately.

In 1938, he successfully sued the Alabama Board of Registrars for its refusal to register to vote seven black school teachers. In 1941, he argued all the way to the U.S. Supreme Court that a whites-only railroad union could not exclude blacks and then deny them better jobs because they were not union members. In 1942, he successfully represented a black principal to force the Jefferson County School Board to pay black teachers the same salaries as whites. In 1956, he represented Autherine Lucy in her effort to become the first black student at the University of Alabama. And, in 1963, he successfully argued to the Supreme Court that the arrests of peaceful demonstrators in Birmingham should be ruled unconstitutional.

In the late 1960s, Arthur Shores became the first black member of the Birmingham City Council. He is remembered as a strong and brave advocate, a gentleman at the law, but a lawyer who got results for his clients.