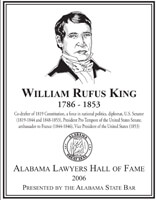 Only one Alabamian has the distinction of holding the office of either President or Vice-President of the United States. These are the two highest constitutional offices in our country. And this same person is unique because he was the only such officer to take the oath of office in a foreign country. That person is William Rufus King. William Rufus King was born on April 7, 1786 in Sampson County, North Carolina. His father was a leader in the American Revolution and he served in the North Carolina legislature as well as the convention that adopted the Federal Constitution.

King graduated in 1803 from the University of North Carolina and studied law with William Duffy in Fayetteville. In 1808 he was elected to the state legislature and in 1810 to the United States House of Representatives. In 1816 he became a diplomat serving with the William Pinckney delegation and he spent two years in Naples, Italy and St. Petersburg, Russia.

Upon returning to the United States, King moved to Dallas County, Alabama Territory and purchased a large plantation. He helped establish the city of Selma. King became involved in Alabama politics and was a member of the Constitutional Convention of 1819. He was a member of the three person committee that drafted the final document. In 1819 he was selected as United States Senator and served with only a four year break until 1853. King supported the Missouri Compromise, land relief legislation, and President Andrew Jackson in the controversy over a National Bank. He opposed the tariffs of 1828 but he also opposed South Carolina’s Acts of Nullification. From 1836 to 1841 King served as President Pro Tem of the Senate.

In 1844 President Tyler appointed Senator King as minister to France. The President knew of his diplomatic experience and King persuaded France not to get involved in the matter of Texas and Mexico which action could have brought England into the controversy. In 1848 King returned to the Senate where he supported Henry Clay’s last great compromise – the Compromise of 1850.

In 1852 the Democratic Party honored King for his many years of service by nominating him for Vice-President on the ticket with Franklin Pierce. He won the nomination on the second ballot defeating his principal opponent – Jefferson Davis of Mississippi. In the general election, the Democrats won all but four states.

Although William Rufus King reached the pinnacle of political success in 1852, his health declined due to tuberculosis. He sought relief in Cuba during the winter and Congress passed special legislation allowing the U. S. Consul in Havana to administer the oath of office to King on March 4, 1853, thus creating his distinction of being the highest ranking U. S. government official to assume office on foreign soil.

King’s health did not improve and he returned to Alabama, landing in Mobile. The trip from Cuba diminished his already weakened condition and he arrived back at his home in Selma on April 16, 1853. He died two days later on April 18 at the age of 67. He is buried in Live Oak Cemetery in Selma.

For all of his contributions to our state and nation, the lawyers of Alabama honor William Rufus King by his induction into the Alabama Lawyers’ Hall of Fame. 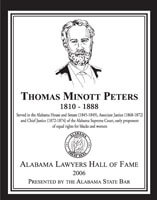 Thomas Minott Peters was born on December 4, 1810 in Clarksville, Tennessee. He moved with his parents to Lawrence County, Alabama in 1819, locating at a farm near Leighton. He attended LaGrange College and graduated from the University of Alabama with a Bachelor’s Degree in 1834 and a Master’s Degree in 1836. He read law at Moulton and was admitted to the Bar in 1836. He had a successful litigation practice in the area. Peters became involved in politics and served in the Alabama House from 1845 to 1846 and the Alabama Senate from 1847 to 1848.

Thomas Minott Peters was a staunch Unionist. With the outbreak of the War Between the States, he left Alabama because of his Union sympathies despite the fact that he was a pre-war slaveholder. Perhaps because he was not a supporter of the Confederacy, his reputation in Alabama is obscure today.

However, in 1868 he was elected to a six year term on the Alabama Supreme Court as a Republican and he became Chief Justice in 1873. He promoted equal rights for African Americans and he was one of the first prominent Alabamians who publicly advocated equal rights for women, a position which was unpopular in both male-dominated political parties of his era. He was defeated for re-election in 1874 but continued to practice law in Moulton until his death in 1888.

Thomas Minott Peters was an advocate for public education, a promoter of industrial development, a nationally recognized naturalist, and an activist for equal rights. For his lifetime of achievement, the lawyers of Alabama induct Thomas Minott Peters into the Alabama Lawyers’ Hall of Fame. 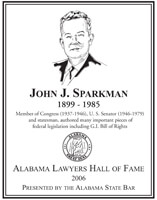 John J. Sparkman was born on a farm near Hartselle, Alabama on December 20, 1899. He had ten brothers and sisters. During high school he worked at raising cotton to make enough money for tuition at the University of Alabama. While at the University he took on several jobs to support himself and he made the most of his opportunities by achieving Phi Beta Kappa, serving as Editor of the Crimson-White newspaper, and being elected President of the Student Government. He earned bachelor, master, and law degrees from the University. Sparkman was admitted to the Bar in 1925 and started a solo practice in Huntsville. He later joined the law firm of Richardson, Taylor, and Sparkman which lasted until his election to Congress in 1936. During ten years in Congress, Sparkman served on the Military Affairs Committee and was elected majority whip. In 1941, he was instrumental in encouraging the Army to locate a chemical munitions plant near Huntsville, and later that year an ordnance plant was also located there. These were the forerunners of the present Redstone Arsenal.

In 1946 Sparkman was easily re-nominated for his House seat but Senator John Bankhead, Jr. died that year. Sparkman ran for the nomination to fill this vacancy. He won that election. In November 1946 he had the distinction of being on the same ballot for the House and Senate and he won both offices. He is believed to be the only person in United States history to accomplish that feat. He immediately resigned his House seat to become a Senator.

One of the highlights of Sparkman’s career was his nomination for the Vice-Presidency in 1952 on the Adlai Stevenson ticket. Though the election was lost to one of the nation’s most popular candidates, General Dwight Eisenhower, Sparkman became the first and only native-born Alabamian to be nominated for Vice-President by the major political parties.

John Sparkman continued to serve his country and the state of Alabama in the Senate. He became chairman of the important Senate Foreign Relations Committee and served in that capacity until his retirement from the Senate in 1979. He had served in the United States Senate from 1946 to 1979, longer than any other Alabamian.

Following his retirement Senator Sparkman returned to Huntsville and practiced law there with his grandson until his death in 1985. Senator Sparkman received many honors during his lifetime but after his death the John J. Sparkman Center for Missile Excellence was dedicated in his honor at Redstone Arsenal on August 22, 1994. In 2006 he was inducted into the Alabama Men’s Hall of Fame. The lawyers of Alabama are now proud to honor John J. Sparkman with his induction into the Alabama Lawyers’ Hall of Fame. 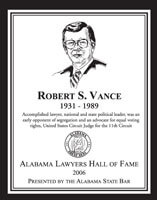 Robert S. Vance was born in Talladega County on May 10, 1931. In 1939 the Vance family moved to the Woodlawn area of Birmingham where Bob spent most of his youth. Not long after entering Woodlawn High School he was appointed a page in the United States House of Representatives. This led to a year in Washington and gave Bob his first exposure to the political arena.

In 1949, Bob enrolled at the University of Alabama on an ROTC scholarship and capped his career when he was elected President of the Student Government Association at the Law School. In October 1953, Bob married Helen Rainey whom he met at the University. The couple moved to Washington, D. C. where Bob was assigned to Army duty at the Pentagon. His service included participation as a member of the Army’s legal team in the Army-McCarthy hearings.

Bob and Helen returned to live in Montgomery in late 1954 where Bob served as a law clerk to Justice James Mayfield of the Supreme Court of Alabama. When his clerkship ended, he took a position as a lawyer with the United States Department of Labor. Two years later he entered private practice in the firm of Hogan and Callaway in Birmingham. He had a varied practice but he particularly enjoyed trial work.

In 1960 he became a member of the firm Jenkins, Cole, Callaway, & Vance. He remained a member through its various changes until he assumed his position on the Federal Appellate Bench in 1978.

Judge Vance’s only elected public offices were those of chairman and member of the State Democratic Executive Committee. In those capacities he had a huge influence on politics in the state of Alabama. He served as chairman from 1966 to 1977 during a period of great political division and unrest in Alabama. He spearheaded the efforts to racially integrate the Democratic Party leadership in Alabama and to unite and move the party forward. He brought about unprecedented changes to the political landscape of Alabama.

During his career, Bob Vance was an opponent of segregation. Also he was an advocate for equal voting rights as evidenced by his participation in the landmark “one man-one vote” case of Reynolds v. Sims that overturned Alabama’s method of apportioning seats in its legislature. He believed in the law and that the rule of law must overrule political expediency and the pressures of contrary public sentiment.

Some of the seconding letters in support of Judge Vance’s nomination to the Lawyers’ Hall of Fame give a true picture of how well he was regarded. Here are examples:

“He stood up against racism when very few white men in this state were willing to do so. And he stood up for consumers against powerful corporate interests when, quite frankly, virtually no one in the nation did so”.

“Bob should not be considered for this honor because of his untimely death, but because of the contributions he made during his lifetime to our profession and to the state of Alabama, the state he dearly loved and served”.

“Outside my parents, no single individual influenced my life more than Bob Vance. He taught me the importance of research, writing, preparation, being strong in the pursuit of your goals, but being circumspect in the process. I have always considered Bob Vance to be my mentor”.

And finally, “Judge Vance had a distinguished and varied legal career before his appointment to the Circuit Court of Appeals. He was a professional of the highest order and I have no doubt that if it were not for his tragic death, he would have been a strong candidate for a seat on the United States Supreme Court”.

In December 1989, Judge Robert Vance was killed by the explosion of a package bomb which had been delivered through the mail to his home. The legal community and the community at large deeply felt his loss. The Alabama State Bar is proud to include him in the Alabama Lawyers’ Hall of Fame.