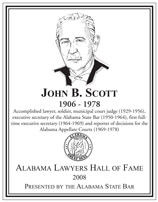 John B. Scott began the study of law at age 17, in 1923, straight out of high school. He graduated from the University of Alabama School of Law in June 1926. At the time of his admission to the Bar on June 14, 1926, he was the youngest lawyer in the state of Alabama. Though a young lawyer, his family roots in Alabama were long and deep. He was the great-great-grandson of General John Scott, one of the founders of Montgomery.

John practiced law from 1926 to 1964 with the exception of his service years during World War II from 1943 to 1946. He was separated from the Army with the rank of major. He also served continuously as a City of Montgomery Municipal Court Judge from 1929 to 1956, again only with the exception of his military service time. And he served on the Board of Bar Commissioners from 1930 to 1950, also the only break being his time in the Army. On September 1, 1950, Judge Scott assumed the duties of secretary of the Alabama State Bar. At that time this was a part-time position. It was in this capacity that he set about the task of securing funding for the construction of the Alabama State Bar Building. The dedication of that beautiful structure took place in 1964 and the Board of Bar Commissioners placed a bronze plaque in the building to show their appreciation to John B. Scott for his vision and leadership in the conception and erection of the Bar’s headquarters. He also supervised the creation of the Alabama State Bar Foundation which was the vehicle for fundraising and which owns the building.

In 1964 Judge Scott closed his law office to become the first full-time secretary of the Alabama State Bar. He continued in this position until June 1, 1969, when he became the reporter of decisions for the Alabama appellate courts. He served as the reporter until his death on February 23, 1978.

Judge Scott lived a full life and had a fulfilling legal career, but he was also an accomplished writer and poet. The following is one of his poems, entitled “An Appellate Judge”.

“An appellate judge is but a drudge

With work that’s never done with

Is all he can have fun with.

Those who aspire to robes’ estate

Had best put thought of gain behind them

For banks and brokers neither never

Take the time to find them.

That some reward in fact exists

Isn’t quite a fable

Because every now and then

They are at the speaker’s table.

Would cause some disaffection

But strange to say they every one

John B. Scott was a leader, a literary man, a soldier, a free spirit, and a great lawyer. The Alabama Bar is proud that he is a member of the Alabama Lawyers’ Hall of Fame. 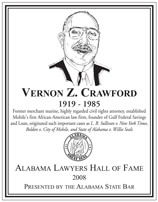 Vernon Z. Crawford was born in Mobile, Alabama in 1919 and graduated from the Allen Institute. During World War II he served as a merchant seaman and in 1951 he graduated from Alabama State University with a Bachelor of Science degree. Crawford attended Brooklyn Law School from which he graduated in 1956. Returning to Mobile, he established the city’s first African-American law firm which was located on Davis Avenue.

Some of the important lawsuits which were handled by his firm included the constitutional law landmark L. B. Sullivan v. New York Times, State of Alabama v. Willie Seals, Bolden v. City of Mobile, which challenged the constitutionality of Mobile’s commission form of municipal government and brought about the mayor-council system of government, Birdie Mae Davis v. Mobile County School Board, and Broughton v. City of Mobile. While working pro bono for a white Kilby Prison inmate, Crawford successfully obtained the first writ of error coram nobis in the history of Mobile County.

Crawford mentored many of the successful African-American attorneys in Mobile. Among his law partners and associates were A. J. Cooper, who served as mayor of Prichard; Michael Figures, who served in the Alabama State Senate and who is also an inductee of the Alabama Lawyers’ Hall of Fame; Cain Kennedy, a Mobile County circuit judge; and David Coar, a United States District Court Judge. He was honored by the black lawyers’ association in Mobile when that organization was named the Vernon Z. Crawford Bay Area Bar Association.

Crawford was a cooperating attorney with the NAACP Legal Defense fund. He founded the Gulf Federal Savings and Loan in Mobile, and he continued a successful law practice in Mobile until his death in 1986. His legal papers are preserved today in the University of South Alabama Archives.

Vernon Crawford is remembered as the “dean” of African American attorneys in Mobile. 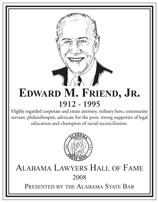 Edward M. Friend, Jr., whose name aptly described his personality and his efforts to help his fellow man, was born in Birmingham on May 1, 1912. He graduated from Phillips High School and was a 1933 Phi Beta Kappa graduate of the University of Alabama. He received a commission in the Army Reserve and later a law degree from Alabama in 1935. He practiced law in Birmingham until 1941when he entered military service.

Ed Friend, the soldier, served in North Africa, participated in the invasion of Sicily, and then landed on Utah Beach on June 7, 1944, the day after D-day. He took part in the capture of Cherbourg, the breakthrough at St. Lo, the Battle of the Bulge, and the invasion of Germany. Friend received the Legion of Merit, the Croix de Guerre, and the European Campaign Ribbon with seven battle stars. After he was released from active duty with the rank of colonel he continued his military service in the Army Reserve and the Alabama National Guard, retiring with the rank of major general.

Following World War II Friend returned to Birmingham to practice law and he co-founded the firm now known as Sirote & Permutt. He was an expert in the fields of tax law and corporate and estate planning. General Friend was an outstanding lawyer but he is most fondly remembered for being an outstanding humanitarian.

General Friend was an unwavering supporter of the University of Alabama School of Law. He was an early organizer and president of the Law School Foundation and a co-founder of the Farrah Law Society. He devoted countless hours to fundraising for his alma mater.

As stated by Mason Davis in his nominating letter, “General friend knew instinctively what was fair, just, and honorable; he was a great role model who brought great dignity and civility to the profession he loved. He did the right things for the right reasons”. 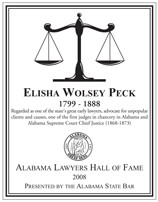 Elisha Wolsey Peck is regarded as one of Alabama’s great early advocates, usually representing the defense or handling appeals. He was born in New York State in 1799 and was admitted to the Bar of New York in 1825. That same year, he moved to Alabama, settling at Elyton. He later moved to Tuscaloosa, then the capital of the state, which offered him more opportunities. In 1832, he formed a partnership with Harvey W. Ellis. In the June term of 1836 they handled between them 25 appellate cases. Later he partnered with Lincoln Clark and during the June term of 1847 he argued appellate cases originating in Covington, Dallas, Lowndes, Marengo, Mobile, Monroe, Perry, Pickens, Russell, Shelby, and Tuscaloosa counties.

A case which illustrates Peck’s skill as an advocate involved a black woman in Tuscaloosa named Milly Walker. She had asserted her status as a free person of color in an action against a man who had come to Alabama from Virginia claiming that Walker and her children were fugitive slaves. Walker had been born to a free black woman in Virginia around 1800 and therefore was free herself. At about the age of 15 she moved to Tennessee and eventually came to Alabama as an indentured servant. She had to litigate her status when she was unknowingly sold with her children into slavery. That litigation ended in a finding of her freedom.

Peck entered the life of Milly Walker 15 years after this litigation when Richard W. Fields of Virginia filed a claim that Milly and her three children were all his slaves and were fugitives from Virginia. Peck first attempted to end this matter with a non-jury habeas corpus proceeding which he won but which the Alabama Supreme Court reversed. He then had to file a formal petition for Walker’s freedom which called for a jury trial. The trial was held in September 1852 and a jury once again decided that the Walkers were free persons of color. Richard Fields then appealed the trial judgment. However, Peck’s brief won the day when the Alabama Supreme Court affirmed the trial court. This case is reported in 23 Ala 155 (1853).

Peck was appointed one of the first judges in chancery in Alabama and served for a few years before he resumed his private practice. He was a Whig and a Union man who opposed secession. He favored returning to the Union during the Civil War, though he was never disloyal to the Confederacy. After the war he became a Republican. For a short time he left Alabama and lived in Illinois but after a few months he returned to his home in Tuscaloosa. Thereafter, in 1867, he was elected chairman of the military reconstruction convention. A few months later he was chosen to serve as Chief Justice of the Alabama Supreme Court. He remained on the bench for five years until he resigned. Peck continued to practice law in Tuscaloosa and he died a respected citizen in 1888.

Peck was described in the memoirs of E. A. Powell, a circuit court clerk, as simply the best lawyer he had ever seen in a courtroom. Peck’s long history of service to the profession and his desire to remain in Alabama testify to his stature as a member of the Alabama legal community.