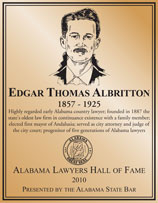 Young Edgar Thomas Albritton was in the depths of despair when he left Snow Hill, North Carolina, on a train bound for Mobile, Alabama in 1886.  He had lost his wife of four years to typhoid fever, his infant daughter to diphtheria, and he had almost died himself. He had left his son William with an aunt in Washington, D.C. until he got situated. He had left his law practice and intended to join his brother in Mobile who was working for United Fruit Company. Edgar hoped that new activities would help him recover his enthusiasm for life.

On the way to Mobile, the train stopped in Greenville, Alabama, to unload a circus on its way to winter quarters in Florida. Edgar met a local lawyer, Dempsey Powell, who had just been admitted to the Bar and had begun his practice in Greenville. Edgar told Dempsey his sad story, adding that what he really wanted to do was to go to a place at the “end of nowhere” and start a new life. Dempsey Powell suggested that Edgar go to Andalusia, Alabama telling him that it was the best place he knew that would fit that description. Edgar followed Dempsey’s advice, going to Andalusia, which was to Edgar the end of the railroad line and the end of nowhere.

By January 12, 1887, Edgar was admitted to practice law in Alabama and began a practice which continues today, and which has had Albritton family members as partners throughout its more than 120 year history, now into its fifth generation, including a father and son who served as presidents of the Alabama State Bar. This firm is the oldest known in the state continually in practice with descendants of its founder still active in the firm. Edgar was elected the first mayor of Andalusia and he also served as city attorney and judge of the city court. The firm has been instrumental in the growth of the city of Andalusia, which no one would call the “end of nowhere” today.

Honesty, integrity, and square-dealing were the hallmarks of the life of Edgar Thomas Albritton. If the proof is in staying power, then he has certainly met that burden of proof. His approach to the practice of law and to public service would be the foundation and inspiration for those who followed him through the years in the law firm which he founded in 1887 and which continues without interruption with family member descendants to this day. The lawyers of Alabama proudly welcome him as a member of the Alabama Lawyers Hall of Fame. 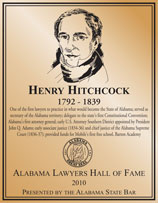 Henry Hitchcock was born in Burlington, Vermont on September 11, 1792, the son of a judge and the grandson of Revolutionary War hero, General Ethan Allen. He graduated from the University of Vermont in 1811. He then began the study of law and was admitted to the Bar in 1815. He left home that year and arrived in Mobile, Alabama in January, 1816. He immediately opened a law practice but soon moved to St. Stephens, capital of the Alabama Territory.

He was appointed Secretary of the Territory which required him to perform the duties of the Governor in his absence. He represented Washington County in the State Constitutional Convention of 1819 and together with two other delegates did most of the drafting that led to the first Alabama Constitution.

When Alabama became a state, Hitchcock was elected its first Attorney General and he moved to the first permanent capital at Cahaba. In 1822 he compiled the first book published in Alabama entitled: “The Justice of the Peace”. In 1825 he delivered an address of welcome to General Lafayette upon his visit to the Alabama capital. Lafayette later paid him a personal call because he had known Hitchcock’s grandfather, Ethan Allen.

When the capital was moved to Tuscaloosa in 1825, Hitchcock returned to Mobile. He was appointed U. S. Attorney by President John Quincy Adams for the Southern District of Alabama. He served in this capacity until 1830. Then in 1834 he was elected an Associate Justice of the Alabama Supreme Court and in 1836 he became Chief Justice, resigning in 1837. In 1839 he was elected to the Alabama House of Representatives but died 6 days later due to a yellow fever epidemic which struck Mobile. He was 47 years of age.

At the time of his death, Hitchcock was remembered as a respected lawyer, a dedicated public servant, and a philanthropist.  He assisted in the construction of the Barton Academy in Mobile, the first free public school for poor people in Alabama, and he contributed almost the entire cost for building the Government Street Presbyterian Church in Mobile.

Henry Hitchcock was an outstanding early Alabamian who contributed to the betterment of his adopted state. He is now a member of the Alabama Lawyers Hall of Fame. 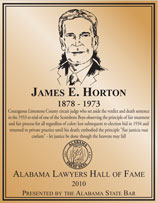 James Edwin Horton was born somewhere in Tennessee, no one is quite sure exactly where, in 1878. His father had served in the Confederate Army and his mother was a niece of former President Andrew Jackson. The family later moved to Athens, Alabama. The young Horton initially enrolled at Vanderbilt Medical School but changed to law school, graduating from the Cumberland School of Law in Lebanon, Tennessee in 1899. Before entering private practice he clerked for his father who had become a Probate Judge.

Horton served in the Alabama House and the Alabama Senate. Eventually he became a Chancery Court Judge and in 1922 a Circuit Court Judge in Decatur. In 1933, having served 11 years as a Circuit Judge, he was assigned the case of Haywood Patterson, one of the Scottsboro Boys. This case had been transferred to his Decatur court.

The trial of Haywood Patterson was contentious and brought with it international media coverage. Patterson was eventually found guilty of rape by a jury. However, on June 22, 1933, Judge Horton ruled on a defense motion and set aside Patterson’s guilty verdict. Judge Horton granted the motion stating that the jury’s verdict was not supported by substantial evidence and he ordered a new trial. He was removed as the trial judge for the re-trial.

In May 1934, Judge Horton stood for election for his third term as a Circuit Judge. He had two opponents and he finished second in the primary resulting in a run-off election. In the run-off he was defeated and he retired from politics. The remaining years of his life were spent in private practice, farming, and raising cattle.

No one doubted that Judge Horton lost his re-election because of his ruling in the Patterson case. Cumberland Law School Dean, John Carroll, has written that the order of Judge Horton in setting aside the jury verdict was one of the most courageous judicial acts in all of American law. Even though the Judge knew that many citizens would be outraged, that simply did not matter. The rule of law was more important.

In later years Judge Horton quoted a Latin saying which was often repeated in the Horton family: “Fiat justicia ruat coelum”; which is translated as “Let justice be done though the heavens may fall”.

Judge James Edwin Horton died in 1973. He was a role model for judicial fearlessness. The lawyers of Alabama now recognize him as a member of the Alabama Lawyers Hall of Fame. 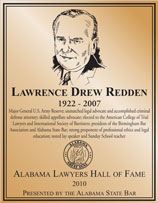 Lawrence Drew Redden was born in Tallassee, Alabama on December 16, 1922. He was a Phi Beta Kappa graduate of the University of Alabama and an outstanding student at the U of A Law School, serving as the first Editor-in-Chief of the Alabama Law Review.

Redden began his law career in 1949 and served as an Assistant U.S. Attorney in Birmingham. He entered private practice in 1952 and continued until his death in 2007. His law practice was wide-ranging and varied, both civil and criminal. He represented all clients with energy, zeal, and devotion as a lawyer.

During his years of practice Drew Redden was considered one of the premier criminal defense lawyers in Alabama. He participated in many highly publicized criminal trials in both State and Federal courts. He was widely recognized as an unexcelled trial advocate and a superb appellate advocate.

Redden was also a fine exemplar of the present State Bar Motto that “Lawyers Render Service”. He was President of both the Birmingham Bar and the Alabama State Bar. He was a supporter of the American Bar, the Alabama Bar, and the University of Alabama Law School foundations. He served on the Alabama Law Institute and was on the Alabama Lawyers Hall of Fame selection committee. And he was active as a Sunday school teacher at the Dawson Memorial Baptist Church.

In addition, Drew Redden was a citizen-soldier. He was commissioned a 2nd Lieutenant and served in World War II in both the European and Pacific theaters. He remained a member of the United States Army Reserve and retired in 1979 with the rank of Major General, serving as the commander of Army Reserve units in Alabama, Mississippi, and Tennessee. He concluded his service to the armed forces as the Alabama State Chairman of the Committee for Employer Support of the Guard and Reserve.

Drew Redden had a lifetime of achievements in service to his country and the legal profession. The lawyers of Alabama are proud to add his name to the roster of the Alabama Lawyers Hall of Fame. 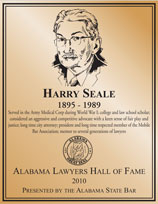 Harry Seale was born in Choctaw County, Alabama on January 13, 1895. He came to the law as his profession later in life. He was a soldier in World War I, held jobs in mines, factories, and fields, and then he attended the University of Alabama, receiving both undergraduate and law degrees and was selected for Phi Beta Kappa. He began practicing law in Mobile in 1927 and continued his practice for more than 50 years. He was President of the Mobile Bar in 1958.

Mr. Harry, as he was later called by younger lawyers, was primarily a criminal defense lawyer although he handled many different types of cases and was Mobile City Attorney for 20 years. He was aggressive and competitive in his representation of clients but at the same time he was a gentleman in the law who had a keen sense of fair play.

In his nomination of Harry Seale for the Hall of Fame, the nominator stated that he and Mr. Harry had once settled a case at the courthouse on a Friday, had walked over to Harry’s office, and there he paid over to the lawyer a stack of one hundred dollar bills for the settlement. “He said that it was not necessary for me to give him a receipt or any type release because I was an honorable person and he was too and our word was our bond. I dismissed the case and that was the end of the litigation”. With Mr. Harry you knew that you would not have to have an agreement in writing because he would always keep his side of the agreement.

He was also an inspiration to younger lawyers. His law partner, Bubba Marsal, once commented that Mr. Harry was his mentor. He stated: “I would never have been a lawyer or enjoyed one good thing in my life without his inspiration and encouragement. There are so many good things about Harry Seale that the world will never know”.

The Alabama State Bar welcomes Harry Seale into its Lawyers Hall of Fame so that future generations will begin to know this great lawyer.